Our CAP/CLIA certified lab, PacificDx is partnered with CHOC (Children’s Hospital of Orange County) to identify rare inherited blood disorders in infants and mothers to improve their quality of life.

The last royal family of Russia was speculated to be plagued with the “royal bleeding disease” passed down by Queen Victoria of England who married her descendants into royal families across Europe. This could not be confirmed until 2007 when a construction worker discovered the remaining missing bodies of the royal family; Tsarevich Alexei and his sister, believed to be either Maria or Anastasia Romanov, were buried a short distance away from the mass grave holding Tzar Nicholas II, Tzarina Alexandra, their three daughters, and servants exhumed a decade earlier in 1991.

Researcher Evgeny Rogaev led a team to sequence Alexei and his sister’s genes. They discovered the Romanov family had a substitution upstream of the F9 gene generating a premature stop codon. Using this, scientists concluded the Romanovs inherited from Queen Victoria, the rare form of hemophilia, type B which is exclusively related to Factor 9 levels. Alexei, who suffered from prolonged bleeding was confirmed to be hemizygous for the mutation and his sister, who was buried with him, was a heterozygous carrier1.

Hemophilia and Other Blood Disorders

Hemophilia, a disease affecting proteins in the blood called clotting factors, is the most infamous inherited blood disorder, however, there are many others included in the following categories.2

The relationship between clotting factors and blood cells such as platelets can be visualized with the clotting (coagulation) cascade where platelets flood to the scene of tissue injury and activate the clotting proteins including Factor 8 and 9 through tissue factor (TF).

The gene mutations for many rare blood disorders have been identified including Hemophilia which is a recessive X-linked disease. This means it can remain undetected in females who become carriers and pass the disease on. Males more commonly inherit hemophilia because they only possess one X chromosome. Patients who suffer from hemophilia cannot produce enough clotting factors to stop bleeding.

Genetic mutations can also affect the formation of blood cells. For example in a condition called May-Hegglin anomaly, the platelets and WBCs are deformed and do not function normally. The cause is an inherited autosomal dominant disease– the mutant allele, found at Locus 22q12-136 (MYH9), can be inherited equally from either parent. The child will inherit the disorder with either a heterozygous and homozygous genotype for this disease.7

May Hegglin Anomaly is another rare blood disorder involving platelet shape (giant platelets boxed in image) and creates deformed WBCs with Dohle bodies (circled). May-Hegglin was first described in May 1909, by Doctor Hegglin. Since then, fewer than a hundred cases have been reported. In approximately half of the cases, patients are asymptomatic. The other half have low platelet counts of <50K/uL and the following symptoms. 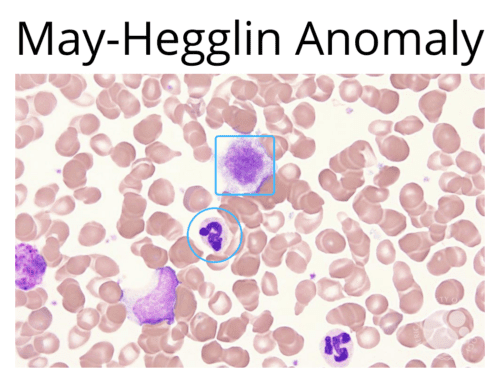 NOTE: excessive bleeding may occur when steroids used to treat other blood disorders are discontinued.

There are as many as 7000 known rare diseases. Many are undiagnosed and untreated due to the lack of tools to identify them. PacificDxTM is partnered with Children’s Hospital of Orange County (CHOC) to identify the genetics underlying rare blood disorders. The laboratory uses Next Generation Sequencing (NGS) to target capture genes of interest in an assay called HADL30. The test is named for the Hematology Advanced Diagnostic Laboratory (HADL) at the Center for Inherited Blood Disorders founded by Dr. Diane Nugent. The Center has multiple locations including CHOC dedicated to identifying the causes of inherited blood disorders.

Genetic testing now plays an increasing role in our lives and we have only scratched the surface of its potential. NGS has only existed in the last decade and yet already it has improved our quality of life. For example, PacificDxTM uses, NGS to detect rare blood disorders,  predispositions to certain cancers, and conditions such as celiac disease and Barrett’s Esophagus. NGS also connects us to the past with the discovery of the hemophilia gene in the Romanov family and helps us now, in taking steps to improve health for future generations.